An apt name not only for the fantastic piece of art, hung atop the Frederic C. Hamilton Building in Denver Colorado, but for the process involved getting the project completed.

Designed by artist Elizabeth Gill Lui, her vision was to create a series of images that referenced the Rocky Mountains. She accomplished this by shooting thousands of images of city lights in her hometown of Los Angeles. From there she was able to edit the images and link them together to create a seamless mural of mountains created by light.

The idea was to etch the images on glass and illuminate them with LED edge lighting at night and let light transfer create all of the magic during the day. To accomplish this task, FGD Glass Solutions was called in for the job.

The etched glass was the most challenging aspect because the right combination of color and contrast caused new challenges. Since the panels were laminated to meet code, and laminate absorbs so much light from the LED edge lit strips, FGD Glass Solutions needed to ensure that the thicker of the two laminated panels was directly over the LED’s so only the etching would be lit. There also had to be a tolerance within the hardware to allow for expansion and contraction due to Colorado’s extreme weather.

The second challenge was the lighting aspect because the implementation involved the most collaboration. The entire mural was divided into sections of separate fixtures designed, fabricated, and delivered to the site. A custom cap was designed, engineered, and manufactured to unify the existing balustrade with the new one and to create a raceway for the lead wiring on each fixture to it’s driver concealed in an electrical box located in a distant location.

Every aspect of this project had to be done right the first time, and this came through collaboration. A fine tuned choreography between FGD Glass Solutions, the artist, owner, interior designer, architect, engineer, general contractor, property management, electricians, and glazers.

FGD Glass Solutions is proud to have taken an abstract piece of art and turned it into a functional application. Being part of a team and solving problems. 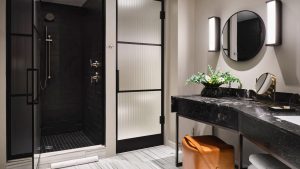 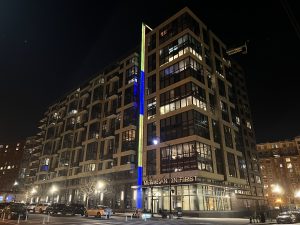 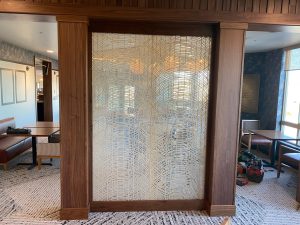